Back in 2015, I had the pleasure of documenting the production of a short horror film.

Now I had never done anything like this before, so when the director Luke Brady asked me if I’d be up for it, I gladly accepted the assignment.

In many ways, it was a bit like shooting a wedding – you just step back, watch people arrange things and document the proceedings without getting in anyones the way.

The real difference in the process was when it came to editing the images.

I use Adobe Lightroom to edit most of my photos and for the most part, I had various plug-ins and preferences saved that I use to speed up the editing process. Now for weddings and portraits, the look of traditional Kodak Porta 400 (a VSCO plug-in I use, based on the film stock of the same name) fits perfectly.

But for a gritty horror film, this slightly faded and somewhat delicate setting just wasn’t working for me.

After several attempts, I decided to take a look at some movie production stills and realised I had to completely throw out the rule book. I had to drastically saturate the images and up the clarity – things I usually avoid doing. I also needed to darken, and slightly saturate the red, in order for the blood to look more real and less comic book.

In short, I needed these shots to have a bleach bypass effect – similar to that of the visual style of Saving Private Ryan.

I’ve never really thought about it before, but it’s quite interesting how the post development work on a photograph can make such a dramatic difference. I usually hate having the highly stylise a photograph, but in this instance it made total sense. It makes the image look slightly detached from reality and more cinematic – so upon viewing the image, you know that it’s not genuine. You can see that Beth (Eliza Murray) is a fictionalised character and that screwdriver in her eye is no real major cause for concern.

I have to say that I am really pleased with how the shots turned out.

I’ve also gotta say that I had a complete blast doing this. I met some incredibly talented people (Holly Sermon’s make-up work is breathtaking!) and it was a real honour to witness everyone involved at work.

You can view the shorts below. 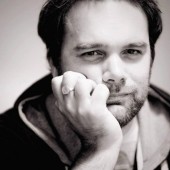 Behind the scenes: The Highridge Massacre

Documenting: A wet and windy night in the West End